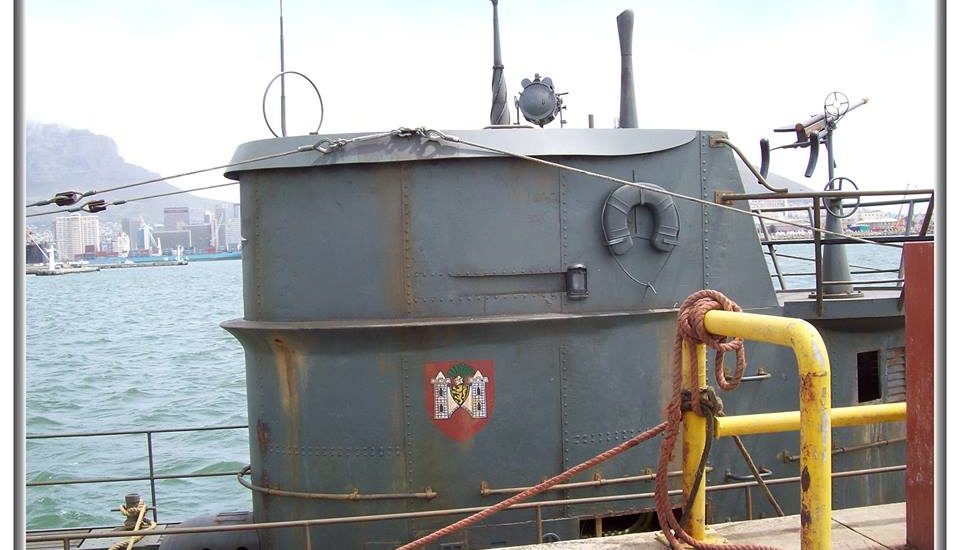 During the dark, dog day drear of World War Two, a submarine alarm went off on Robben Island. Were the Germans invading? Crew stationed there dismissed the alarm as a whale. But not everyone was convinced. More than 70 years later, people still have strong opinions about the incident!

When a Robben Island swimmer mentioned recently that his grandparents had met each other while they were stationed on Robben Island during World War 2, it sparked off a fascinating conversation on social media.

Graeme Hurst was the 1000th person to swim Robben Island under official CLDSA rules. He says part of the motivation for doing the swim was that the island held a special place in his heart. His grandparents had met and fallen in love while stationed there as naval officers during WWII. If they hadn’t, this story would be about someone else. Howard, probably.

Anyway, Graeme’s grandfather, Len Hurst, was boss U-boat hunter, while his gran, Joyce Westerton, did the trigonometry voodoo that lobbed shore-to-sea shells, hopefully, right bang on top of a German sea invasion. It was rare at that time for a woman to have a degree, never mind to be so intimately involved in the male-dominated world of parabolic thrust, and its military applications.

Anyhoo. Graeme said that he had grown up hearing cool stories about his grandparents’ roles during the war. One such anecdote concerned the island’s U-boat detection system. “As with most coastal cities around the world during the conflict, Cape Town had a nightly black-out in place to thwart any invasion and the harbour and coastline were closely monitored,” he says.

“The detection system in place on Robben Island was an early form of underwater sonar that could detect a steel mass passing through the bay. And on one occasion it went off!

“With no sign of any U-boat lurking behind the breakers, everyone involved attributed the alarm to a whale in the bay, but my grandfather wasn’t convinced,” says Graeme.

“He said, ‘If that was a whale, then it’s full of rusty nails.’ This earned him the instant sobriquet, ‘Rusty Nails’.

“No one thought anything more of the event until after the war when a German U-boat was recovered off South America and Sea Point movie house tickets were found on board.”

And that’s where this story starts. I turned to social media to check this gem of an anecdote.

Were Sea Point movie tickets really found on board a German U-boat? Surely not? Although it’s the stuff of narrative. You can see the gleam in the gloom, can’t you, of the bold freggatenkapitan’s grin, waves lapping softly against the hull, one misty night off Sea Point prom, as he contemplates the risk of sneaking ashore, finding Riebeek Street, though his accent would help, and buying tickets to (and here I did some research) Ride Em, Cowboy, with Bud Abbott and Lou Costello.

Moreover, if this were true, it would lend weight to grandpa Rusty’s insistence that a U-boat had set that alarm off after all, whales surely not being that uncommon a visitor, nor made of metal?

On the Sea Point Then and Now, and the South African Shipwrecks and Shipping Accidents Facebook sites, people started sharing their stories, and the story took off.

The group administrator of the Shipwrecks page, Leon van der Westhuizen. pointed me towards a book, “U-Boats… & Spies in Southern Africa” by Jochen Mahncke. Page 28. Reference is made to the bodies of two German soldiers’ bodies that washed up on the rocks at Bakoven, and in their pockets were tickets to the Rocklands cinema.”

Moreover, a group member, Phillip Short, said that he was aware of a U-boat that had been captured in the North Atlantic. Tickets from the Alhambra Theatre were found in the officers’ clothing and possessions. “Apparently they were picked up by sympathisers around the Kommetjie, Misty Cliffs area and brought into town. Jochen Mahncke (spelling!) wrote a book I think…”

Patrick Cannell said the story is very likely true. “These U-boats rounded the Cape on way to Japan. They had many sympathisers here. They came in via small boats and even restocked with South African fruit and vegetables! Many boer sympathisers held fresh in their memory how England treated them in the Anglo-Boer war and saw the Nazis as friends.”

But Jeff Gaisford says that the anecdote was probably not true. “I’m open to correction, and there are photos, apparently taken from a U-boat, off Sea Point at night, and a skipper’s log entry about hearing the hooting of traffic, they were that close inshore. And there was a fair amount of U-boat activity off Cape Town in the early 1940s.

“But I think the movie ticket story is highly suspect. Same as the much-believed tale of a secret underground U-boat base at St Lucia estuary in KZN. Anyone who has been to St Lucia will realise it’s a physical impossibility. There are many strange tales of U-boats doing strange things off the SA coast. The only one that has any factual basis is the landing of Robey Leibrand from a U-boat on the west coast.”

Jeff said that there was also a tale of a U-boat landing a boat at Sodwana, on the KZN north coast, and taking on fresh water at the stream there. “Again, not likely given that to refill a U-boat’s water tanks would require a massive amount of water which would keep one small boat busy for a week!

“U-boats certainly sank a fair number of ships off the Zululand coast, including the Nova Scotia and Mount Helmos. We were constantly finding human bones in the dunes, as the sand shifted, and these were apparently victims of the Nova Scotia sinking, and their bodies washed ashore as far down as Durban.”

However, another member, William Crawford said that in the 1950s, he had heard tales from Bredasdorp locals that U-boat crew members would go ashore at Potteberg near Infanta to hunt game for meat. Some farmers in the district were sympathisers,”and the painted-out Swastika signs on the Nachtwacht farm buildings were removed about 30 or so years ago.”

But, replied David Lehr, these tales owe more to the literary embellishments of author Lawrence Green, than any real basis in fact. “All mostly urban legend. The old barn door at Nachtwacht had a Maltese Cross painted on it and not a Swastika. Also, the wartime SAAF airfield near Struisbaai from where anti-submarine patrols were conducted, and the coastal radar stations, would have made any U-boat foray inshore a foolhardy and dangerous exercise.”

Which is a shame, because as Neil Lurssen quipped, “If they did have Sea Point bioscope tickets, for a tickey (3 pennies) they could have bought a pack of Messaris chips during interval and swopped their comics!”

Other commentators pointed out that family members had been arrested during the war for signalling to U-boats!

Back to Jeff – “There is a plethora of Johnny Walker tales concerning the U-boats. The fact remains that in Admiral Donitz’s U-boat Arm war diaries, and in all the ships’ diaries examined after the war, there is no record of surreptitious landings, other than that of Robey Leibrandt, and no record of clandestine signalling.”

Certainly, there were Nazi sympathisers in Cape Town, said one commentator. “There was a house on Beach Road and the old guy that lived there refused black-out curtains. There is supposed to a picture taken from a sub off Sea Point and, guess what! The single house with lights can be seen!!!”

To which someone else replied, “That was actually an old lady, her grandson was Brian Gilbert, Vice-Headmaster at SPBHS in the 70s, and he said they twice got fined because Granny read novels into the small hours and couldn’t be bothered with the black-out regulations!”

And once again finally back to our favourite military historian, Jeff, whose source for his statements was The War in the Southern Oceans by Captain Roskill, a dedicated naval historian.

“No U-boat skipper would risk his boat and crew by surfacing in a patrolled sea-lane and landing a party to collect meat and fruit. U-boats at that time were resupplied deep in the south Atlantic by U 458, which was a supply submarine.”

But, away back to Grandpa Rusty and gran-gran. After the war, she returned to teaching with a position at Pinelands High, while he became a news reader at the SABC!

And that’s why I love swimming. It passes the miles.