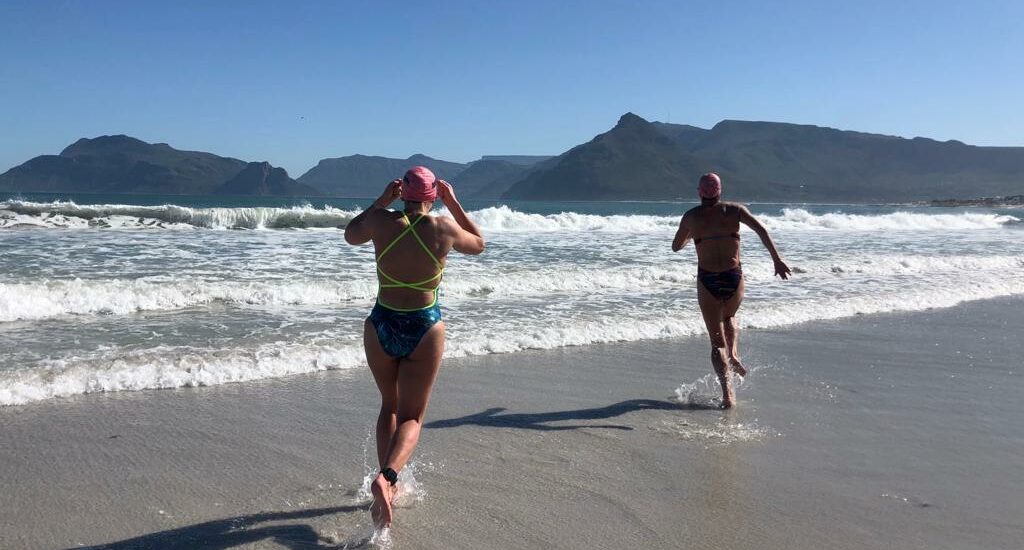 From jimjams in the pool, to the Fish Hoek safe zone, and from Cape Point and the island, to Cape Town’s very own Channel, we chat to two extraordinary swimmers who are shocking their bodies into submission for a False Bay crossing.

(This story also appeared on Daily Maverick, at https://www.dailymaverick.co.za/article/2022-02-22-moonlight-bath-selenophiles-unite/)

Meet Kirsty and Georgina. You might have seen them getting into the sea and getting out again. Then getting back in, and out. In and out, just like the late, great Theodore Yach recommended in his book. The only way to acclimatise your body to the cold, is to suffer through the repetition. And they’re gonna need it.

Kirsty and Georgina are gearing up for a relay False Bay crossing, for the former CLDSA chair, the Chin man’s charity Swim for Rivers. Georgina, who works in financial services as Head of Wealth at Liberty, says she relishes a challenge! She says she also has a problem saying, “No!”

“I’ve always loved big and difficult goals, so it’s inevitable, really, that I end up doing exciting, adventurous, but quite scary stuff.”

So it’s all the more remarkable that she didn’t like swimming as a laaitjie. “I grew up in the UK and didn’t really like the swimming at all. In fact, my swimming memories revolve around verruca-infested changing rooms, and collecting rubber bricks from the bottom of the pool in my pyjamas.

“I joined the local swim squad when I moved to SA six years ago, just as a way to meet people. Then a friend suggested open-water swimming. I spent six months anxiously swimming on the safe side of the shark nets at Fish Hoek, petrified of the kelp. Over time, the group convinced me to push the boundaries and somehow on the back of lockdown frustration I agreed to swim around Cape Point. Then I was hooked and have done several other swims since, such as Robben Island and being part of the first four-woman relay team across False Bay.”

G met Kirsty some five years ago through cycling, but only started swim training together a couple of months ago. “She’s a terrific, natural swimmer and is always up for a challenge. She’s also a pretty good synchronised swimmer and has tried but failed to teach me some moves!”

And this all started as a way to support a mate – CLDSA rock star Kat Persson in her upcoming English Channel swim! “Kat came to me and suggested it and I then asked Kirsty. It was only after she agreed that I told her she wasn’t allowed to do it in a wetsuit!”

G says they have a “a crazy strategy” which is all about replicating the feeling of doing a relay. Getting in, getting cold, getting out and getting in again. If both women take it in turns to swim an hour each, that means both will face four or five “afterdrops” each. “You want to get through them as quickly as possible so that you can then rehydrate and get warm on the boat ready for your next hour swimming. And they’re exhausting!

“Inevitably our weekend sessions can be quite long, and we’ve had amazing support from our friends who are also part of the False Bay swimming crew. We just tell people where we’ll be and what time we’ll be swimming different segments and people come along and join us. Last weekend we swam three stints in Kommetjie in 9C. It was brutal, but with friends to help you through it was much easier.

“We’re doing it for Swim for Rivers. When you have a purpose, your mindset is different and more determined. Yes, I will definitely explore all corners and cobwebs in my pain cave, but that makes the achievement all the more special!?