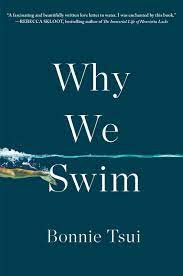 “This summer I went swimming/ This summer I might have drowned/ But I held my breath and I kicked my feet/ And I moved my arms around.

“This summer I swam in the ocean/ And I swam in a swimming pool/ I salt my wounds, chlorine my eyes/ I’m a self-destructive fool”

Google it. It’s called the Swimming Song, and it hit the charts in 1973, courtesy of the American songwriter Loudon Wainwright. The lyrics appear in a chapter in San Francisco swimmer-turned-author Bonnie Tsui’s book Why We Swim, which is all about swimming basically being an attempt both to commune with a higher energy, and to not drown. The yin and yang of the open-water swimmer’s mind, if you will. Polar opposites. Both fascination and warning. Silly and sublime.

Anyway, Google the song. It’s a jingly-jangly, folksy commentary of the life aquatic. And so’s Bonnie’s book. It’s the sort of book we all wish we had written. Both historical exploration of humans and water, as well as an attempt to explain the unexplainable – the higher primates’ absolute fascination with immersing ourselves in one of the strangest substances in the universe, without which life, and Roka goggles, would be pure sci-fi.

Bonnie chats to just about everyone in her quest to shine light on why we swim. From that chubby Icelandic fisherman who fell overboard and stunned the world by his ability to survive for hours in near-zero degree water, to fellow polar bears Lewis Pugh and Lynne Cox, to the masters of mind over matter – the Japanese Samurai swimmers of Yokohama, and of course, most importantly, the fish and chips, too. That’s us. From San Francisco Bay to Cape Town, and all ports in between, regular Joe and Joanne Public who keeps on getting back in to cold, boisterous water.

But, why do we do it? As Bonnie says in her chapter titled Flow, “Yes, as everybody knows, meditation and water are wedded forever.” That a quote from Ishmael in Moby Dick. And that observant, complex young man perhaps sums it all up right there. In Bonnie’s own words, we swim because swimming is “a wormhole through which to escape the grinding machinery of everyday life”.

Not to forget, of course, those mirrored, high-optics goggles.

What did you get personally out of writing this book?

I loved having the chance to interrogate something that has been an integral part of my life for as long as I can remember. Part of the joy of being a journalist is that I get to ask other people about their stories — what they told me helped me to understand more about our curious human relationship with the water.

Did bringing this book onto the shelves bring you some peace?

Putting a book out into the world is always a little scary. You spend years working on a thing and you don’t know how it will be received. But once it’s out there, there’s a kind of letting go — and it has been lovely to see Why We Swim having a life of its own: going places, being read, having its picture taken. When someone posts a photo of the book in a glamorous and beautiful beach somewhere, it’s thrilling. I like to joke that my book has traveled more than I have this year.

How often do you swim these days, and where mainly?

Most mornings I’m either in the Pacific for a surf or at my neighbourhood pool. Last week, I got to swim on the Big Island of Hawaii, where my brother-in-law got married. The warm water was glorious.

May I ask that most terrible of questions – why do you keep swimming in the cold, boisterous water?

It makes me feel alive.

Do you think open-water swimmers have something to prove, either to ourselves or to others?

Everyone is different. For myself, I like to travel by open-water swimming — it’s a wonderful way to get to know a place. And every once in a while,e I like to challenge myself with more rugged, wild waters.

And, finally, when can we expect to see you lining up to do a Robben Island crossing?

When are you sending me a ticket?